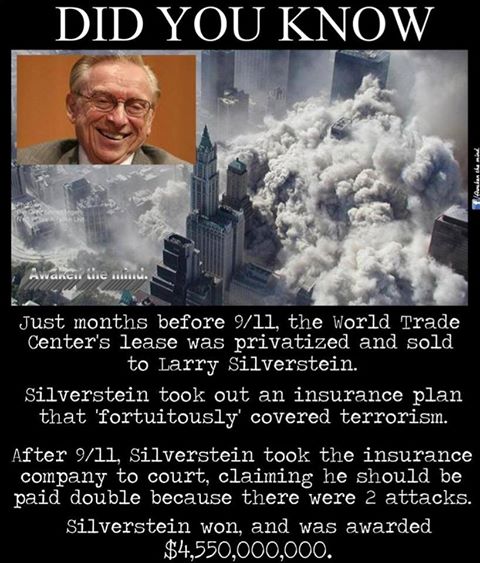 Larry Silverstein said he was reviewing plans for a new World Trade Center 7 before the very suspect 9/11 events. Does that not mean he had foreknowledge of what was going to happen on 9/11?  It sure does! I believe any reasonable person would think that alone was an admittance of involvement in the 9/11 crimes. He also benefited the most from the 9/11 crimes.

Silverstein confessed to demolishing at least one building himself? In the 2002 PBS documentary “America Rebuilds,” Silverstein admitted to complicity in the controlled demolition of WTC-7, a 47-story skyscraper that dropped into its own footprint in 6.5 seconds.

Video: Fire Fighters Kept out of WTC-7 “all day”

Larry Silverstein was caught admitting on camera that he planned to build an entirely new World Trade Center 7 (WTC-7) building one year before the 9/11 attacks had occurred.

by Sean Adl-Tabatabai | Your News Wire

Back in April 2000, one year and five months before the attacks, “Lucky Larry” held a meeting to discuss plans to replace building 7 in 2002.  As reported by Veterans Today:

“We got the designs.  And the first design meeting was in April of 2000. And construction began shortly thereafter, in 2002.”

One slight problem: If he hadn’t been planning the illegal, un-permitted, homicidal demolitions of WTC-7 and the entire World Trade Center complex that took place on September 11th, 2001, there would have been no point to any such design meeting back in April, 2000 … and no opportunity for beginning construction of a new WTC-7 in 2002.

With the supreme chutzpah that has become his trademark, Silverstein breezes over the demolitions of 9/11/2001 as if they were not even worth remarking on, instead going straight from his new-WTC-7 design meeting in April 2000 to the beginning of construction in 2002.

In 2001, “Lucky Larry,” who had previously owned only WTC-7, orchestrated a deal with his fellow-ultra-Zionist Lewis Eisenberg, Chairman of the mobbed-up NY Port Authority, and another Zionist extremist billionaire, Frank Lowy, to sell the entire WTC complex to Silverstein and backers on a 100-year lease. The deal was finalized in July, 2001, and Larry took possession of the buildings … and security arrangements. But first, he hard-balled his insurers into doubling the terror insurance coverage and changing the terms to “instant cash payout.”

On September 11th, Larry hit the jackpot. The condemned-for-asbestos and largely vacant Twin Towers, with their obsolete communications infrastructure and money-hemorrhaging balance sheet, were both demolished for free – with 3,000 people inside.

Larry should have been at the Windows on the World restaurant at the top of the North Tower, just like every other day. Fortunately, he tells us, his wife reminded him of a dermatologist appointment. His daughter, who always took breakfast with him, made a similarly lame excuse. Both survived … and prospered … while everyone above the 91st floor, including everyone who showed up to have breakfast at Windows on the  World, died miserable deaths.

Larry’s luck held out when he demanded double indemnity – on the basis that he had been “victimized” by two completely separate and unrelated terrorist attacks, namely the two planes – and got it, to the tune of 4. 5 billion dollars. That’s a hefty cash-payout return on a relatively minor investment. (Silverstein put up less than 15 million of his own money to buy the WTC, and his backers had added a little over 100 million.)

Even after video proof emerged that he had confessed to “pulling” (i.e. demolishing) WTC-7, he still somehow evaded the hangman’s noose.

Then he went back to court to ask for more than $10 billion more – this time not from his own insurers, but from those of the airlines he falsely blamed for the demolitions that he himself had conducted.

But that didn’t stop not-quite-so-Lucky Larry from trying to steal another 500 million from the federal government through an EB-5 visa scam.

Then last month, Larry’s inimitable chutzpah resurfaced when he said that his first thought on looking at the plans for the new South Tower was “it looks like it’s going to topple, it’s going to fall over.” At least if you “pull” on it hard enough, it might. Right, Larry?

Larry’s chutzpah is so monumental that it became the basis of an annual award.

Whatever will this unbelievable character do next?

Will someone finally arrest him?

Will we ever see him swing from the gallows?

Or will Lucky Larry’s luck hold out until he finally dies of natural causes, leaving his heirs billions of blood-stained dollars with which to conduct more outrageous Zionist mischief? 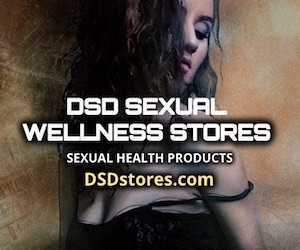